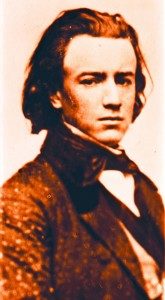 John Burroughs, the celebrated naturalist whose 27 books of nature and philosophical essays influenced millions of readers, was born April 3, 1837 on the family’s homestead in Roxbury, Delaware County, NY. There he learned the rhythms of nature and the connections between all living things, lessons that shaped his career as a literary naturalist.

“The secret of my youth in age is the simple life – simple food, sound sleep, the open air, daily work, kind thoughts, love of nature and joy and contentment in the world in which I live…“

Excerpted from a letter written by Burroughs on his 74th birthday to 600,000 New York City school children.

John was the seventh of ten children of Chauncey and Amy Kelly Burroughs. Like his siblings, John was called upon to do his share of farm work. But he preferred books to chores, and at age 17 left home to become a teacher in a succession of one-room schools. Looking for greener pastures, he went to Washington, DC where he spent the Civil War years working at the Treasury Department, and writing. It was in DC that he met poet Walt Whitman who influenced his work and became a close comrade.

When he wasn’t cultivating grapes and celery, John was busy perfecting the art of the nature essay. His work appeared in Harper’s, Scribner’s, Atlantic Monthly and other magazines of the day, opening the eyes of his 19th- and 20th-century contemporaries to the wonders of the natural world right outside their doors.

Burroughs’ essays were collected in books that sold more than a million and a half copies in his lifetime and were required reading in schools across the country. He became a respected friend of such luminaries as novelist Hamlin Garland and journalist Ida Tarbell, industrialists Henry Ford, Harvey Firestone and Thomas Edison; and political leaders including Teddy Roosevelt, who wrote of Burroughs, “It is a good thing for our people that you should have lived.”

In 1899 he served as the historian on the Harriman Expedition exploring the coast of Alaska with conservationist John Muir, artist Louis Agassiz, photographer Edward Curtis and a host of scientists.

He traveled extensively, and spoke to large audiences. But always his heart remained in the Catskills. “Those hills comfort me as no other place in the world,” he wrote. And so, in 1910, Burroughs returned to the family farm to spend summers in a little house his brother Curtis had built half a century earlier. John named it Woodchuck Lodge because of the furry rodents that proliferated there.

He built a porch for rocking, sleeping and listening to the Victrola on soft summer nights. He spent many happy hours writing on a packing crate positioned in the doorway of a hay barn up the road. And he entertained neighbors, kin and the rich and famous, including Ford, Firestone and Edison, who, in 1916, camped in the orchard across the road from the Lodge at the start of one of the Four Vagabonds’ highly publicized excursions.

While he was not a strict conservationist or an environmental activist, his message of land stewardship and his quiet warnings about the potential impact of unchecked development and resource consumption resonate today.

John Burroughs died March 29, 1921 on a train headed east after a winter in California. His last words: “How far are we from home?”
The New York Times devoted most of its front page to his obituary. The funeral was attended by a crowd of farm neighbors and celebrities. And then, on his 84th birthday, he was buried in what is now John Burroughs Memorial Field, a state historic site just up the road from Woodchuck Lodge and within a mile of the farmstead where he was raised.

“The pastoral is in my veins. Clover and timothy, daisies and buttercups indirectly colored my youthful life; and if the dairy cow did not rock my cradle, her products sustained the hand that did rock it. Hence I love this land of wide, open, grassy fields, of smooth, broad-backed hills, and of long, flowing mountain lines.”

The Summit of the Years